Leo Carter and Foy Ann met in 1939 at Ft. Worth’s then and still 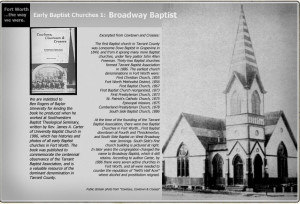 very well-attended Broadway Baptist Church.  For him and his father, John Carlton, it was only a five-minute walk from their nearby home and for her and her mother Iola and step-father Repolion a fifteen-minute ride on a Ft. Worth Street Railway Co. street car from the Polytechnic area of Ft. Worth.

Leo Carter was 19 and Foy Ann was 14 and, according to her, she decided at first sight that she would have him as her husband.  I don’t have  full details of their romance, but Foy Ann would occasionally wax nostalgic and share a little.  Enough, in fact, for me to understand that the relationship was in several ways a gamble for each of them.

War was on the horizon that year and it struck home on September 15 1940, when the Burke-Wadsworth Act (aka The Selective Training and Service Act of 1940) cleared the House (232 – 124) and the Senate (47 – 25) and the next day was signed into law by FDR.  It was the first peace-time draft in the history of the United States and required all men between the ages of 21 and 35 to register with local draft boards and set the maximum term of service at 12 months.

At 5′ 7″, 126 ½ lbs. and a graduate of Paschal High School who was working as a trunk maker in Ft. Worth, Leo Carter fit the bill and when his number was up he was inducted into the U. S. Army on January 16, 1941 in Dallas and assigned to US Army’s ill-fated 2nd Battalion, 131st Field Artillery.

However dark the pall, there was still hope in the hearts of many, including Leo Carter and Foy Ann.  The term of service on that day was one year and there was a chance that he might be able to put in his time and then move on to grow as an artist.  But on August 18, 1941 – the day Leo Carter turned 21 – FDR signed a Bill which extended the Burke-Wadsworth Act’s term of service to eighteen months.  And when the waves of global war broke upon the shores of Hawaii on December 7, 1941, the term of service for everyone in any branch of the military was extended to the duration plus six months.

For Foy Ann, who was first separated from Leo Carter when he was sent for training as a radio operator at Camp Bowie in Texas’ Brown County some 150 miles from Ft. Worth, things definitely weren’t going the way she at age 16 wanted them to go.  And when Leo Carter’s selection for training under the Enlisted Pilot program took him from Camp Bowie to Flight School at Jefferson Barracks near Lemay, Mississippi on August 4, 1941, Foy Ann was both in despair and furious over her man being taken to a place so far away.

So, the most pressing question of her life was what could she do about it and the answer later arrived by troop train in the form of entertainer/actor William Wycliffe Anderson, aka Leif Erickson and she would kill two birds with one stone.

Ft. Worth was already the site of one of, if not the nation’s largest railheads when the U.S. Army decided to build the Fort Worth Quartermaster Depot, which served as a distribution point and supply center for the United States Army during World War II.  Proximity to area army camps, large packing plants, highways, and railroad lines made it an ideal location and it was activated on May 4, 1942.  By the end of 1943, it was the second or third largest military supply center in the nation.

Even before construction of the depot began in 1941, however,  draftees and volunteers were being shuttled here, there, and everywhere by train.  But back then as well as now, departure and arrival times were not guaranteed and many wound up with time on their hands at stations across the country.  Also not uncommon were stop-overs of as much as 24 to 48 hours in places entirely foreign to them.  To their great credit, many (mostly female) citizens volunteered to ease the troops’ anxieties and loneliness with coffee, snacks, friendly conversation, music, dance, and even meals at their own homes.

And that is how Naval Combat Photographer-to-be William Wycliffe Anderson, who had completed his study of photography at the Naval Training Center in Pensacola, Florida and done a brief stint there as an instructor, became part of Foy Ann’s efforts to catch up with then “Flying Sergeant”/Flight Officer  Leo Carter in California before he left for parts unknown in 1943, which, by a twist of fate, would also become Mr. Anderson’s wartime turf.

Foy Ann was an attractive and, when she felt it necessary, manipulative young thing soon to be 18, who, according to her, drew intense interest from Mr. Anderson who, again according to her, told her that “With his looks and her brains they could make beautiful children.” and ultimately fronted her the fare to join him in California.

But, Bill Anderson was never to see her again because Foy Ann took the money and ran not to Los Angeles, but to Fairfield California, where Fairfield-Suison Airfield (now Travis AFB) was located and from which Leo Carter would, on his 23rd birthday – August 18 1943 – ferry a B-24 to the Southwest Pacific island of Espiritu Santo.

Thing is, Foy Ann and Leo Carter’s June 27 1943 marriage at Salinas California was both unlawful and risky for several reasons.

Foy Ann was 17 and not emancipated, which put Leo Carter at risk of being charged under

the Mann Act for taking a woman across state borders for “immoral purposes”, just as was done to Charlie Chaplin in 1944.  Also, the name she gave the presiding Police Judge was false – she was born Foy Ann Snider, not Fay Ann Snider as shown on the marriage certificate.

Once married, Foy Ann returned to Ft. Worth, where risk incarnate could be found in the person of her mother’s ex-husband and Foy’s biological father, Moody LaFoy Snider, who could have brought the house down around everybody involved.  The problem was that Moody LaFoy couldn’t have cared less about anything or anyone from which he could not readily profit and he might have smelled opportunity if he found out about the marriage.  So, it had to remain Foy Ann’s and Iola’s secret until Foy Ann turned 18 on August 20 1943.

But, Foy Ann also needed to resolve the only remaining issue she had with her father ever having been part of her life – Her first name, which was derived from his middle name.  So, on that Monday she and Iola went to the Tarrant County Clerk’s office, and convinced a pliable member of the staff that she needed a revised birth certificate because her name had been incorrectly spelled, which could in the future be a problem for her and her USAAF husband and she left with an official and unquestionable replacement in hand.

Now to be known to all as Fay Ann, she had only to wait for the resolution of the risk to life and limb Leo Carter would face wherever he might be.

There remains, however, one question that will never be answered –  Did Leo Carter have to do an end run around a local Command requirement for permission to marry?

I think probably not, but that he would have…